This is the official story–get ready, it’s a whopper—“The homicidal Islamic truckdriver with a trailer full of grenades and guns in the cab told cops he had FREE ICE CREAM so they LET him drive into the promenade.” My ten year old wouldn’t fall for that–I literally teach him not to fall for the puppies & ice cream / guy in a panel truck trick…this is simply not true. It’s just not true. So the cops let him in because…..why?

lest it disappears, here is a copy

Cars and trucks were barred from the Promenade des Anglais during Thursday’s Bastille Day festivities, but the terrorist who plowed a 19-ton truck into a mile-long crowd of revelers – killing at least 84 – reportedly got past police by telling them he had ice cream to hand out.

Mohamed Lahouaiej Bouhlel, a 31-year-old divorced loner, petty criminal and Tunisian national began his route of carnage by slowly moving onto the packed, seaside walkway around 10:40 p.m. local time. Then, say witnesses, he gunned the engine and weaved through the horrified crowd for nearly a mile, leaving a wake of dead and broken bodies. Police killed him in a shootout minutes later.

“Such a monstrosity,” French President Francois Hollande said Friday. “France is deeply saddened, but it is also very strong. I can assure you we will always be stronger than the fanatics who are trying to attack us.”

There was no immediate claim of responsibility, but two sources, including a U.S. counterterrorism source who collects and monitors jihadist social media, told Fox News that accounts linked to ISIS were “celebratory” and their followers were told to use the hashtag “Nice.” 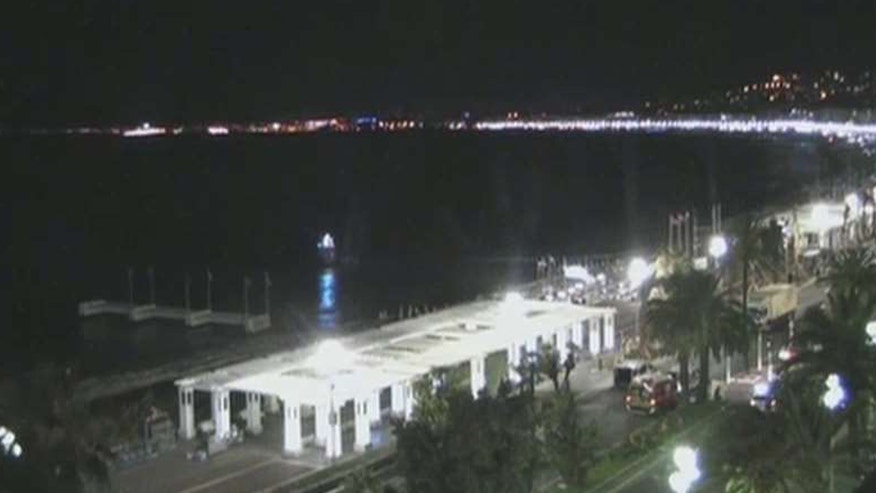 Bouhlel, who shot at revelers after driving through the crowd and was then killed by police, was reportedly known to police prior to the attack although his rap sheet included just one arrest, for a road rage incident in March French Justice Minister Jean-Jacques Urvoas said.

“There was an altercation between him and another driver and he hurled a wooden pallet at the man,” Urvoas told reporters.

Bouhlel was given a suspended sentence and had to contact police once a week, which he did, Urvoas said.

Two Americans among the dead were identified by a relative as Sean Copeland, 51, and his 11-year-old son Brodie. They were from the Austin area and were vacationing with other family members, according to relatives.

Regional President Christian Estrosi also said that more than 10 children were among the dead. A children’s hospital in Nice said it had treated some 50 children and adolescents injured in the attack. Many of the dead were reportedly Muslim, including women whose bodies were seen still clad in the faith’s head scarves.

The Daily Mail reported that Bouhlel told police he was delivering ice cream when they questioned why he was parked on the promenade before the attack, which ravaged one of Europe’s most scenic tourist destinations.

“Why Nice?” Hollande asked. “Because it is a city that is known through the world – it’s one of the most beautiful cities in the world. Why Bastille Day? Because it is the celebration of liberty.”

Damien Allemand, a journalist for Nice-Matin, said the fireworks display was over and people were getting up to leave when they heard a loud noise and screams.

Fatalities and Injuries from Terrorist Attacks in France | FindTheData

“A fraction of a second later, an enormous white truck came along at a crazy speed, turning the wheel to mow down the maximum number of people,” he said. “I saw bodies flying like bowling pins along its route. Heard noises, cries that I will never forget.”

Another witness, Wassim Bouhlel, told The Associated Press that he saw the truck drive into the crowd, then witnessed the driver emerge with a gun and start shooting.

“There was carnage on the road,” Bouhlel said. “Bodies everywhere.”

Video showed men and women — one or two pushing strollers — racing to get away from the scenes. And, in what appeared to be evidence of a gun battle, photos showed a truck with at least half a dozen bullet holes punched through its windshield.

In addition to extending the country’s state of emergency and the Sentinel operation with 10,000 soldiers on patrol, Hollande said he was calling up “operational reserves,” those who have served in the past and will be brought in to help police, particularly at French borders.

President Obama condemned “what appears to be a horrific terrorist attack” in the strongest terms. He odered American flags to be flown at half-staff in honor of the victims.

“On this Bastille Day,” Obama said, “we are reminded of the extraordinary resilience and democratic values that have made France an inspiration to the entire world, and we know that the character of the French Republic will endure long after this devastating and tragic loss of life.”

Presumptive Republican presidential nominee Donald Trump announced late Thursday that he would postpone the announcement of his running mate, which had been scheduled to take place Friday morning.

Flags were lowered to half-staff in Nice and in Paris. Marseille also canceled their fireworks celebrations for Friday.

July 14 is a national holiday in France that commemorates the storming of the Bastille prison in Paris and the start of the French Revolution.

Update: Why would French authorities order destroyed all footage of the Nice attacks? We are told Turkey’s Erdogan is bad because he censors the press and called a state of emergency, but France does the same thing while we overlay their flag on our facebook pages….
Nice Attacks, Destroying Evidence at Crime Scene: French Government Orders Destruction of CCTV Video Footage