Here are my predictions in writing.

Today marks the 100th anniversary of the The Federal Reserve, which is neither federal, nor a reserve! The Fed was in the news this week because outgoing chairman Ben Bernanke announced the beginning of the end for quantitative easing. I discuss these issues and more on this week’s show:

Here are some of the articles and other references that came up on the show:

My favorite book on the Fed, with the genius feature of chapter summaries so you can blow through the big picture in under two hours…awesome!

Here is my post with all the charts that show the destruction the Fed has wrought.

Here are a couple of articles that answer Eric’s points….
The Gold Standard and the Great Depression

Life with the Fed: Sunshine and Lollipops?

Here is the interview Bob recommended….

and the article…
100 Years Later, The Federal Reserve Has Failed At Everything It’s Tried

A caller recommended the video “Money Masters” and I think this is the one he was talking about…looks great!
http://www.youtube.com/watch?v=HfpO-WBz_mw

My seven-year-old was doing a class project on Lewis & Clark. One of the questions each student had to answer about his or her historical subject was how much a gallon of milk cost during their lifetime. It was hard to find a chart of historical price levels, probably because it’s so crazy looking. I finally found one at a teacher’s resource website. The price level is almost flat throughout the 19th century. Price levels actually go down a little while employment levels go up. After 1900 things change. The Fed is created in the early 20th century and, more important, the gold window is closed by Nixon in 1971. The impact is stunning. The steep curve you see is the Fed / govt / banking cartel stealing the people’s money. Here’s what it looks like & to hear some great dialogue on the subject, here is the podcast of today’s show.

Presidential Campaign
I gave up awhile ago on the notion that Democrats vs. Republicans was a battle between social democracy on one side and free market capitalism on the other. Having witnessed the great compromise in which both parties have come together in a Liberal-Fascist Center, I realize that yes, there is a battle between the two parties, but it is one over turf rather than ideology. It reminds me more of the Genoveses vs. the Gambinos than a representative government.
This total acceptance that the politicians are like mobsters and us voters are schlubs there for the shakedown makes it almost impossible for me to even listen to politicians’ BS stump speeches anymore, but I couldn’t resist tuning in to the latest Joe Biden Show. I played the audio Saturday night, but here you can see the fire in his eyes (must have taken a lot of practicing in the mirror to get “resentment” just right.)
[youtube=http://www.youtube.com/watch?v=C1o-CApj1v4]
Can you believe this guy? He’s telling middle class Ohoians he understands them by telling them he wants them to buy a house and go to college. Sorry, Uncle Joe, they fell for that one already! Now their houses are underwater and their grown kids are back at home. The American Dream is NOT a mortgage and a school loan!
The real Joe Biden said this recently at a Democratic fundraiser where he was sucking up to former Chicago Mayor Richard Daley: ”I never had an interest in being a mayor ’cause that’s a real job. You have to produce. That’s why I was able to be a senator for 36 years.” It’s funny ’cause it’s true! Biden was elected senator at the age of 29 and never looked back!

Read moreIt's Just a Turf War! On & About This Week's Show

Concerned citizens marched on the JPMorgan shareholder meeting last week to express their outrage over the risks the bank takes and the losses it bestowed upon its shareholders. The only reason the citizens have any right to protest the actions of banks is that the government bails them out. These people should be protesting at the White House, the Congress & the Fed. The government is the one that uses force to steal our money to bail out private companies. The banks, like all economic actors, finds the highest reward, lowest risk (to them!) way to make money–perverse government incentives create moral hazards resulting in economic behavior that doesn’t reflect the true cost of the action. Stop government intervention and the system would be much more stable! (My blogpost on the subject touches on this as well as hour two of my May 19 show, which you can find at wsbradio.com). 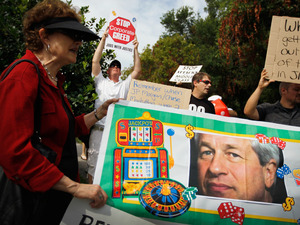 In any case, I sincerely doubt these people are thinking that hard about things. Here’s hidden audio I came upon last year that demonstrates a high level SEIU organizer plotting a protest outside JPMorgan’s shareholder meeting to create a “Madison Moment” like the one Tea Party-types orchestrated in Wisconsin for reform of government employee benefits. In my opinion, this SEIU plan morphed into Occupy Wall Street, but I guess they couldn’t resist hassling JP Morgan since the occasion arose.
[youtube=http://www.youtube.com/watch?v=B0PlElVWshk&feature=player_embedded]

The Presidential Campaign has begun! I don’t feel like it’s two ideological parties fighting for what they think is right, I feel like it’s two mob families going to the mattresses! Also, what’s all this about too-big-to-fail, too-big-to-bail or too-big-to-manage? Government regulations CREATE crazily over-sized corporations, especially banks! They should cut it out! Oh, and can someone commit treason against a party? If so, Boehner’s done it to the Republicans! He’s stalling Congress’s contempt citation against Eric Holder for not responding to inquiries into Operation Fast & Furious. This thing stinks! All that and more on the Monica Perez Show tomorrow night at 9!
Tune in to 750AM, 95.5FM (in Atlanta) or right here online! And don’t forget to call! 404-872-0750 or 800-WSB TALK.
Here’s a video preview of this week’s show (Saturday, May 19, 2012)!
[youtube=http://www.youtube.com/watch?v=pHgnCf4hH20]

Does social power mismanage banking-practice in this-or-that special instance–then let the State, which never has shown itself able to keep its own finances from sinking promptly into the slough of misfeasance, wastefulness and corruption, intervene to “supervise” or “regulate” the whole body of banking-practice, or even take it over entire.-Albert Jay Nock, 1935

Nothing irritates me more than a government-created problem that prompts cries for more government action. A great example of this is the horrible crises, fiscal and monetary, caused in Europe by socialism and central banking, respectively. George Soros and so many others respond to the European Debt Crisis with cries for greater political union and more central government control in Europe. Historical examples of government growth in the wake of government injustice include the response to bans on unionization with laws unfairly favoring unions, or the response to government-mandated segregation with laws that infringe on private property rights under the false guise of pursuing racial justice. (Want racial justice? End the Drug War.)
The latest example of this maddening phenomenon is, generally speaking, the constant demand for more regulation of the financial sector, and specifically, calls for more regulation of trading in the wake of JP Morgan’s recent losses. The fact is, like coal mining, oil drilling and nuclear power, the financial sector is one of the most highly regulated industries in the history of humanity, yet calamities that bring us to the brink of physical, financial and planetary destruction seem to be occurring in these fields at an accelerating pace.

The show this week was great! Thanks to callers and listeners alike. Who knew the European Debt Crisis could be so much fun? To tell you the truth, the truth is so horrible that ya gotta laugh at it or you’d cry! Central economic control and the socialist state are as much a failure in Europe as they were in Russia and North Korea, and as I’m sure we will find, in China, yet Europeans continue to double down by betting again on socialism (in France) and communism (in Greece) in the elections of last week. What are they crazy? (Actually, maybe they are: check out my video preview of the show and the article I reference in that post: 40% of Europeans are reported to suffer mental illness!)
European Debt Crisis
If you haven’t been following the European Debt Crisis, the upshot is that the PIIGS (Portugal, Italy, Ireland, Greece & Spain) are already effectively bankrupt and other countries, including France, are not far behind. Despite this, France replaced it’s “conservative” President Nicolas Sarkozy with a socialist, Francois Hollande, as Hollande promised to spare the French people austerity and still somehow spare them bankruptcy. I don’t even think Hollande believes this is possible, but he will raise taxes in a last ditch effort to placate the masses that he’s doing everything he can to get them their free lunch.
Austerity vs. Liberalization
Frankly, although I am the most fiscally conservative person you could imagine (I think government expenditure should be $0!) I don’t think the austerity they are talking about in Europe would work anyway.

Below is the youtube video of Ron Paul guest hosting on CNBC’s Sqawk Box earlier this week. The whole thing was great watching and worth the time. At one point, Dr. Paul is debating with a guest, Yale Professor Stephen Roach (beginning at 10:27). Dr. Paul claims that the dollar has lost 97% of its value since the Federal Reserve was established in 1913 and Professor Roach says that it is untrue and irresponsible of Dr. Paul to claim such a thing. Dr. Paul’s example was the price of gold, which Professor Roach says is irrelevant. I decided to give Dr. Paul a little back-up. Check out this chart of general U.S. price levels from 1800 to 1999 and see for yourself.

A friend recently asked me to recommend a book that explains the Fed. In my efforts to find the best book to introduce the topic, I came upon this documentary. Although it must be several decades old, it clearly and thoroughly lays out the basics of money and the Fed and can serve as an accessible starting point from which to go on to read one of the many books on the subject, some of which I recommend below.
Continue Reading…

They don’t know it, but Occupy Wall Street craves more capitalism, not less. Listen to my views on the subject in this podcast:
Monica Perez OWS
And if you really want to have some fun, watch this video (there’s a clip from this in the podcast above, but here’s the full rant).
[youtube=http://www.youtube.com/watch?v=cLoQuLlvTZ8]